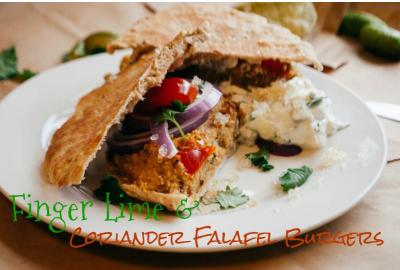 Rewind the clock two weeks and I'd never before heard of finger limes. I didn't even know there was anything other than the regular, circular, green citrus fruit. Five minutes later and a skim through the top Google searches, and I had been enlightened. Admittedly, I had been expecting something the size of a cucumber, but my curiosity was extended further as I examined these small, green fruits that probably matched the length of my finger between knuckle and nail (I suppose the clue was in the name!).

How could something so little make so much of a dish? Finger limes are a rare Australian-born fruit, and once opened reveal what seems like hundreds of tiny, jewel-like beads bursting with sharp, tangy juice. They're a new star in the specialist food market - not even my trusty Dictionary of Food and Nutrition could help me identify them! But so exquisite both in taste and appearance.

They're a stunning embellishment to any dish, and the startling bursts of taste in your mouth go wonderfully as a garnish or recipe ingredient and compliment a wide range of foods, from seafood to dessert, and from complex curries to falafel burgers. With an invested interest in all things vegan and vegetarian, it took a few drafted lists of ingredients before the idea was set in motion: Lime, cumin, and coriander-infused chickpea burgers, with a tangy Greek yoghurt dip packed into toasted pittas.

The sometimes subtle (and sometimes not) lace of lime that ran through the meal was delicious and simple, and to pair falafel with the finger limes that felt so fragile seemed a little like sacrilege, but I am now becoming adept at ignoring doubt and throwing caution to the wind.

For the yoghurt dip:

1. In a food processor, add the chickpeas, one of the red onions garlic gloves, ground coriander, cumin, and chilli flakes. Grate a lime into a small bowl, and squeeze in the juice. Add both zest and juice to the food processor.

2. Next, carefully cut the finger lime in half. Scoop out the juice vesicles from one half, and add to the processor. Set aside the remaining half.

3. Finally, add the salt, pepper and water. Blend the ingredients together on a high speed until everything is fully incorporated. The mixture should stick together, but be careful not to over-blend as it should not become a purée; the texture from the chickpeas should remain.

4. Once the falafel mixture has been blended, spray a frying pan with cooking spray or add a drizzle of olive oil. With clean hands, roll a handful of the falafel in your hand, and then press gently until in the shape of a burger patty. The mixture should make four patties.

5. Place the falafel in the pan, and cook each patty for three to five minutes on each side on a mid to high heat until golden. If you find the mixture struggling to stay together, add a little flour before frying. While the falafel is cooking, toast the pitta bread and carefully cut each open until halved. Slice the remaining red onion, and halve the cherry tomatoes.

6. Add the cooked falafel to the pitta bread, and top with the tomatoes, onion, any remaining coriander, and season with salt and pepper.

7. To make the dip, add the yoghurt, coriander, the juice from the lime, and the stevia to a bowl, and mix well. Set aside in a small dish, and scoop out the remaining juice vesicles from the finger lime to garnish both the yoghurt and the falafel burgers.