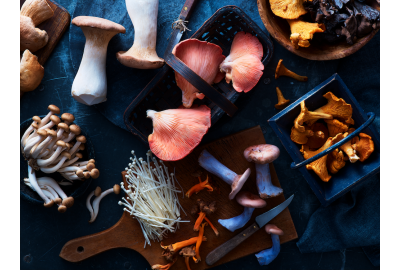 Mushrooms are the perfect way to add depth of flavour to a dish with very little effort, and at Fine Food Specialist, we stock a wide range; from earthy, meaty morels with their distinctive wrinkled caps to delicate golden chanterelles and skinny, silken enoki. Here’s our guide to working with one of nature’s most versatile ingredients.

What is the best way to clean mushrooms?

Before you cook with mushrooms, it’s best to give them a quick once over. Most won’t need much of a wash; just brush off any visible pieces of dirt with a damp cloth and they’re good to go. Having said that, most won’t be troubled by a quick rinse under the tap either; just don’t soak them in a bowl of water as this will prevent them from cooking properly.

Wrinkly mushrooms such as morels, however, should always be washed; sand and grit love to hide in the folds of their pine-cone-like caps, ready to ruin your dinner. Plunge them into cold water and give them a shake around to loosen any unwanted debris (but again, don’t leave them to soak) and dry in a salad spinner if you have one.

How to store mushrooms

Store fresh mushrooms in their original packaging or a brown paper bag in the fridge, to stop any slimy mould forming. Dried mushrooms should be stored away from heat and bright sunlight.

What is the best way to cook mushrooms?

Mushrooms can be cooked in myriad ways, but there are a few important tips and tricks to be aware of. Most crucially, make sure to always season mushrooms at the end of cooking because salting too soon will draw out their juices, making them soggy.

Meaty mushrooms such as oyster and porcini work well pan-fried, ready to serve in pasta, risotto or simply on toast. Add a splash of oil to a pan and cook the mushrooms in a single layer until browned on one side before stirring. Continue to cook until nicely browned all over. Add a good slice of butter, some salt and herbs to finish. 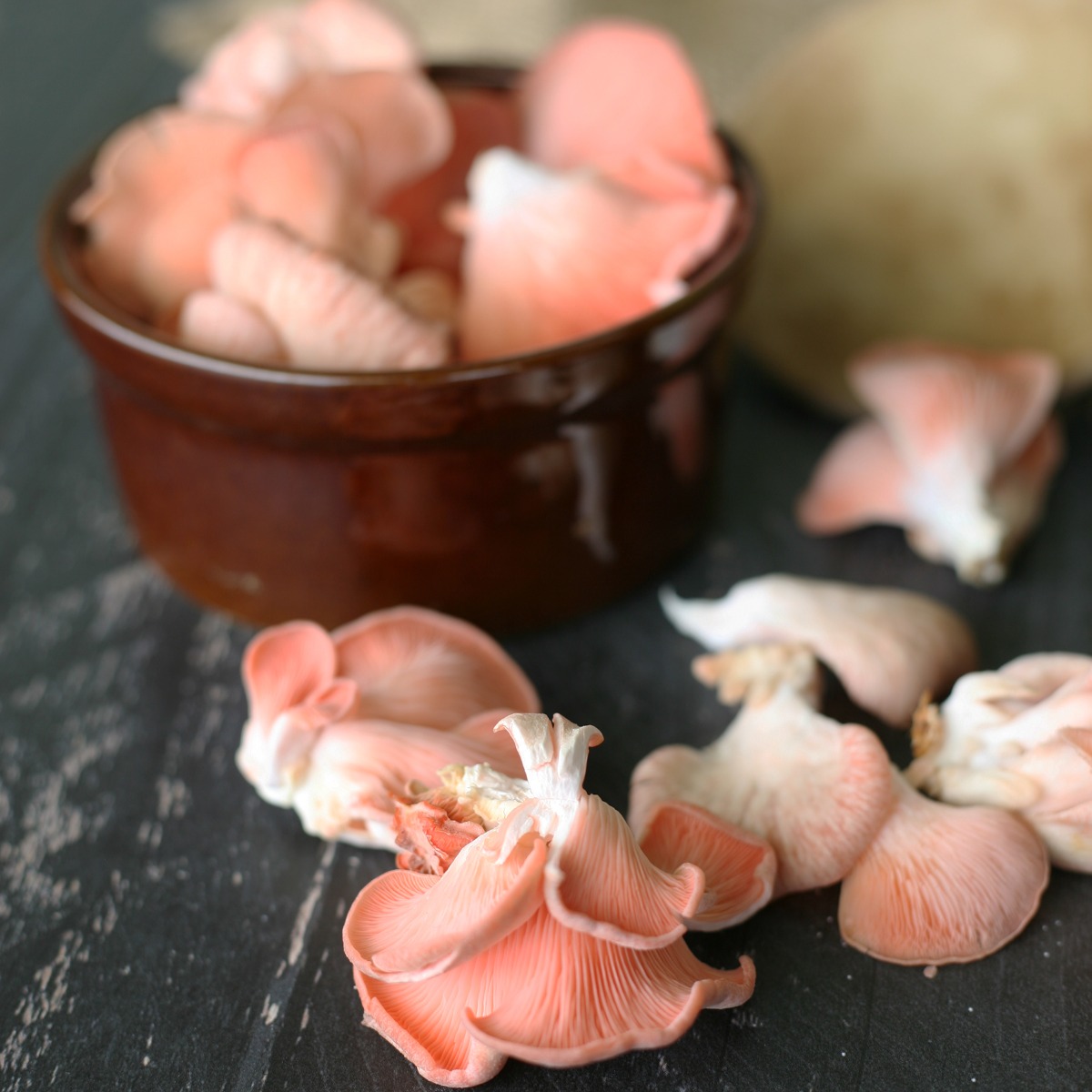 Small mushrooms such as enoki or larger mushrooms sliced into smaller pieces add texture and powerful flavour to a stir fry. Make sure not to crowd the wok as the vegetables will steam; cooking them in batches before combining everything at the end solves this problem.

Coating slender mushrooms in a light batter to make tempura means they cook quickly - a fun and stylish snack or starter.

Some mushrooms such as the firm, meaty shiitake are perfect for simmering gently in soups or stews. Slice large mushrooms or add them whole and they will impart their umami flavour into the broth while also sucking up the other flavours. Pied de Mouton or ‘hedgehog mushroom’ is another great mushroom for this style of cooking. Smaller mushrooms can be quickly blanched then drizzled with a dressing. 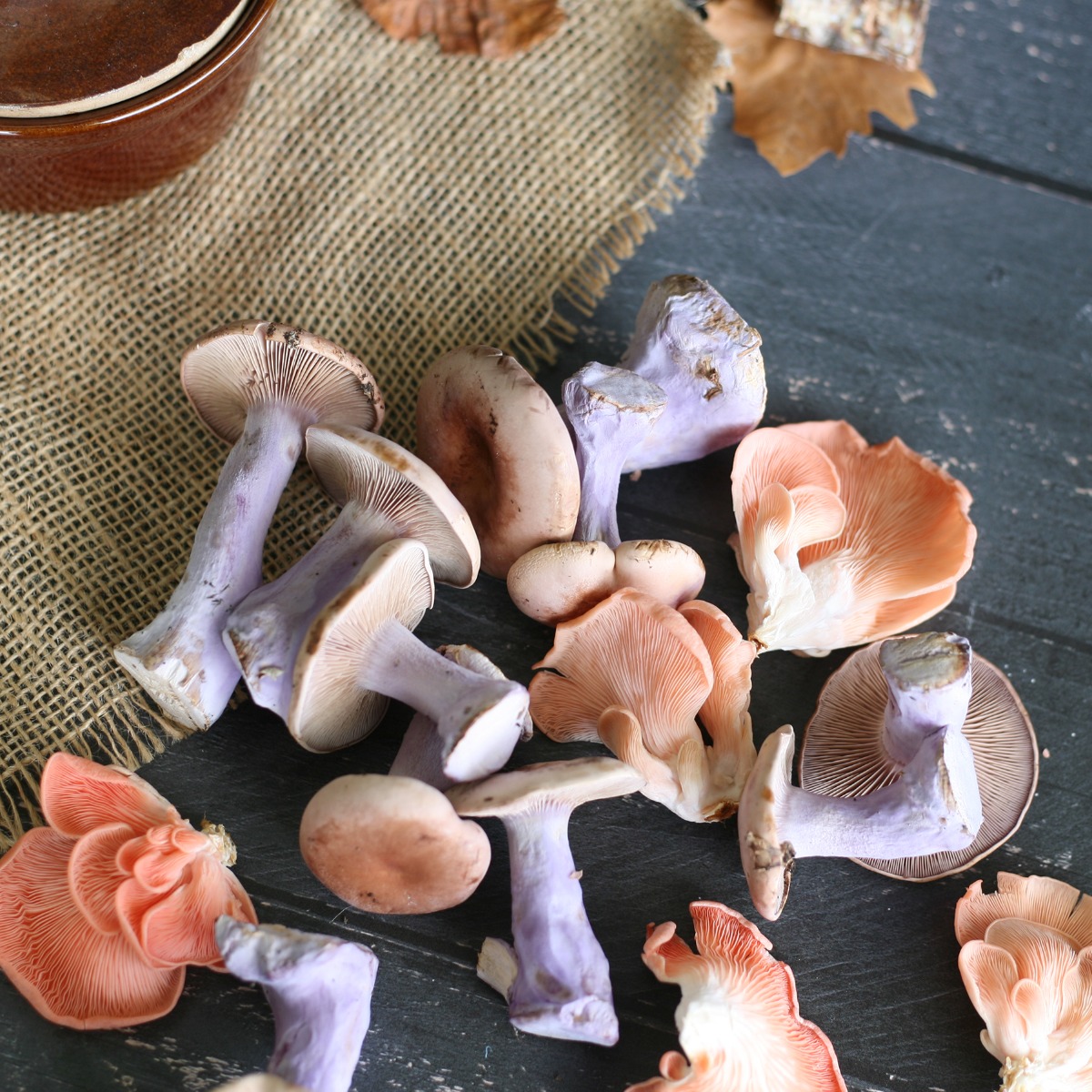 Large mushrooms such as the king oyster are prized for their chunky stature, and perfect for cooking in a griddle pan or on a BBQ. Cut in half lengthways, score lightly in a criss-cross pattern and place cut side down on a lightly oiled grill.

A few mushrooms such as the Paris brown (a variant of the chestnut mushroom) can be sliced and eaten raw - lovely dressed with olive oil and sea salt just before eating or marinated (no salt) and served in a salad. Always check if a mushroom can be eaten raw before consuming! 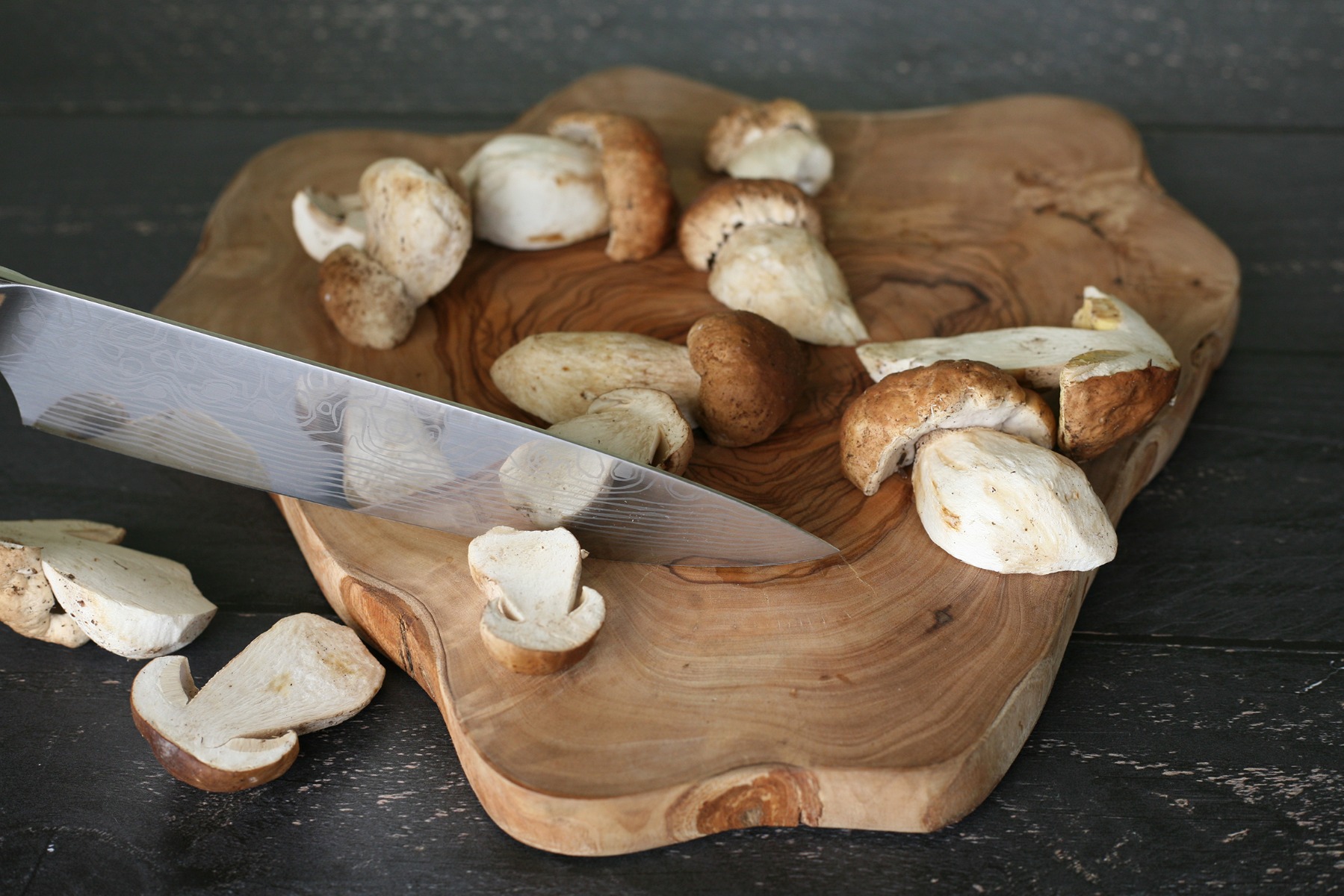 How to use truffles

Truffles are one of the culinary world’s most prized delicacies for good reason: nothing compares to that intoxicating scent and flavour. Generally, they are shaved thinly or finely grated over eggs, pasta, risotto, beef or anything else which provides a suitably rich base for their unique, heady flavour. The Perigord Black truffle has a particularly strong nutty flavour profile and can be cooked without losing its pungency.

How to use dried mushrooms

Drying mushrooms is a traditional way of preserving them for use out of season, making them convenient to store and use quickly to add depth of flavour to soups and stews.

Dried mushrooms such as porcini and morels can be rehydrated before use - simply place them in a bowl of hot water and leave for at least 15 minutes or until plump and rehydrated. If you plan to use the soaking liquor (it will have plenty of flavour!) it’s a good idea to strain it first to remove any bits of dirt and residue.

How to use powdered mushrooms

Dried mushroom powders such as cep/porcini are a great secret weapon to keep on hand for adding instant depth and umami to souffles, soups, stews, savoury custards, sauces, scrambled eggs, omelettes or rubs for barbecued meats.

Which flavours work best with mushrooms?

While mushrooms are an incredibly versatile ingredient with many culinary uses, there are some flavour combinations that are classics for a reason: they will never let you down.

Soft herbs such as parsley and tarragon are perfect partners for mushrooms, particularly with garlic and a squeeze of lemon juice. Woodier herbs such as rosemary and thyme also work well. 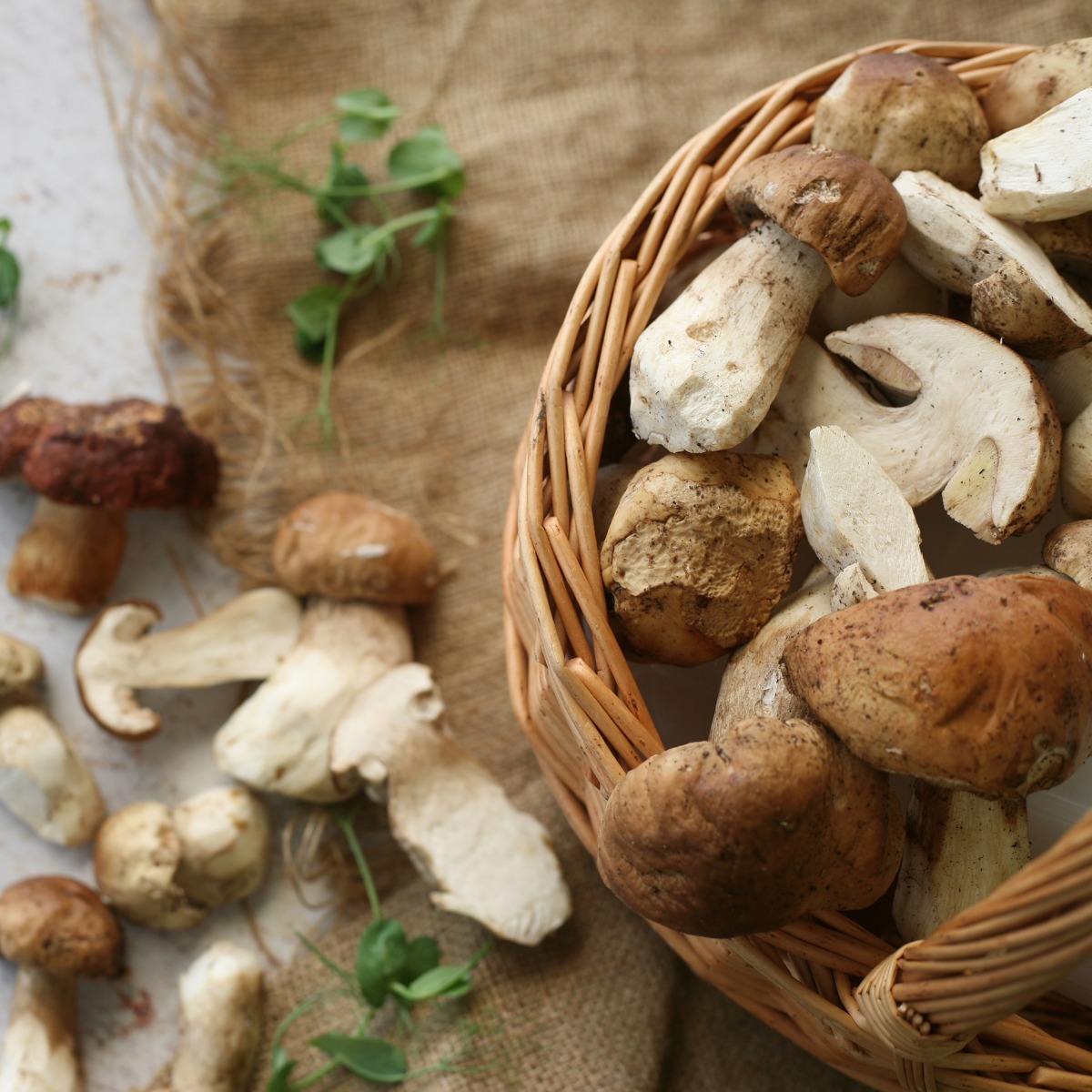 Generally, mushrooms are harvested during autumn, which means they work with earthy, woodland flavours such as hazelnuts and chestnuts.

Autumnal flavours such as butternut squash, onions and leeks always pair well with mushrooms later in the year. However, morels are an exception to the autumnal mushroom rule; harvested at the beginning of spring they’re perfect with fresh asparagus and peas.

Smoky cured meats such as bacon, pancetta and guanciale will serve to enhance mushrooms’ flavour. Beef also matches particularly successfully with strong, rich mushrooms such as trompette de la mort (try a whole fillet cooked with these beautiful black fungi for a stunning centrepiece) or combine mushrooms and beef in a pie with a thick gravy. Of course, a piece of wagyu beef served with plenty of shaved truffle is never a bad idea...

More delicate, peppery mushrooms such as chanterelles prefer to join forces with lighter meat, such as chicken or rabbit.

Eggs and mushrooms are best friends too: try topping fried mushrooms with a poached or fried egg for breakfast or brunch.

It’s no surprise that blue cheese works particularly well with mushrooms since the cheese itself is made ‘blue’ by the presence of fungi. Try Gorgonzola in a wild mushroom risotto or even in a good old cheese toastie.

Sharper cheeses such as goats’ cheese, Parmesan and Pecorino are also good choices, as are nutty, creamy varieties such as Gruyere.

A swirl of creme fraiche or mascarpone will perfectly finish a topping of mushrooms for toast, make a silky sauce for pasta, or round out an indulgent pie filling. Finally, never forget that one of the mushrooms’ ideal partners will always and forever be: plenty of good butter. 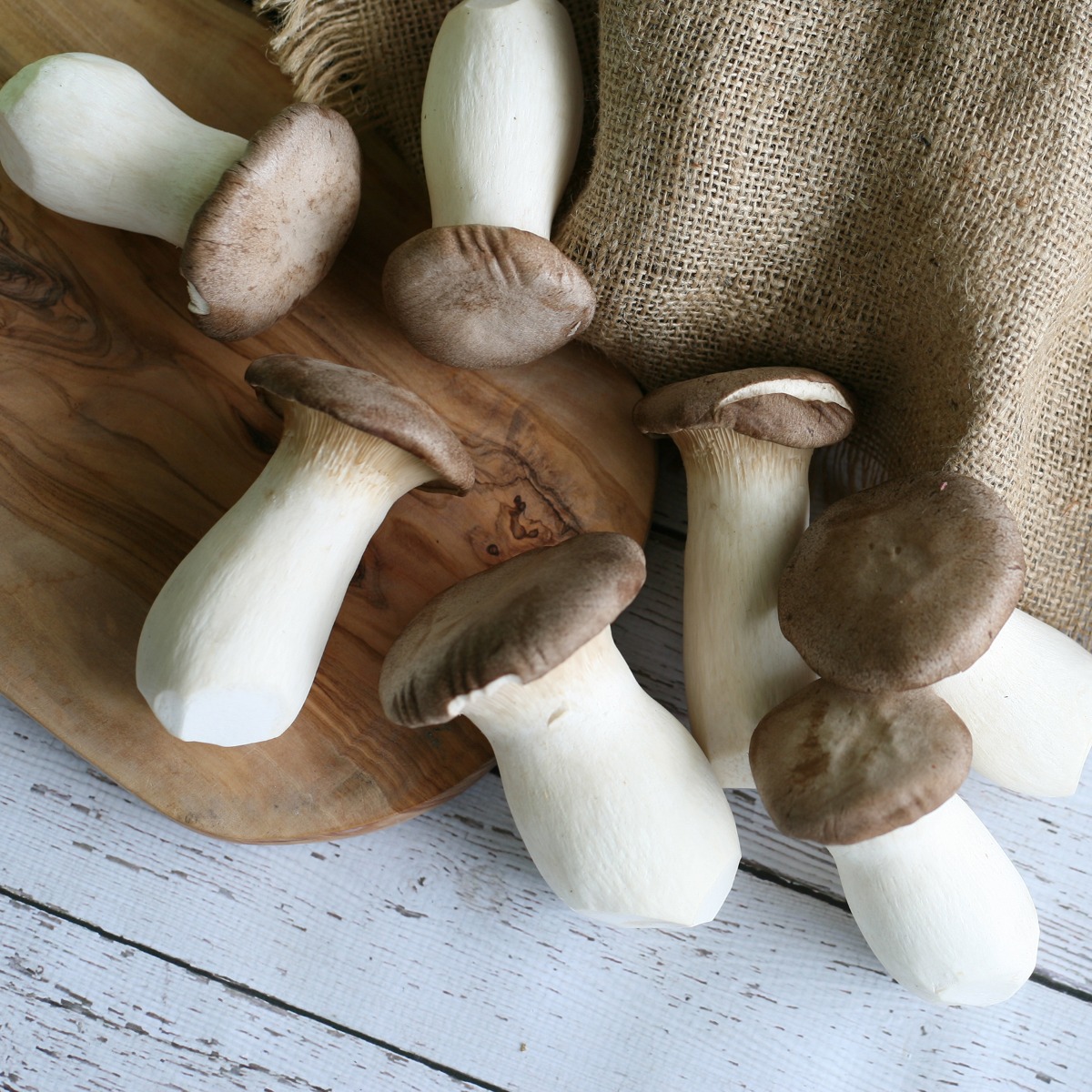 Our favourite ways to cook seasonal mushrooms, scroll through and tap the picture for the recipe!

Cod with Morels and Tarragon 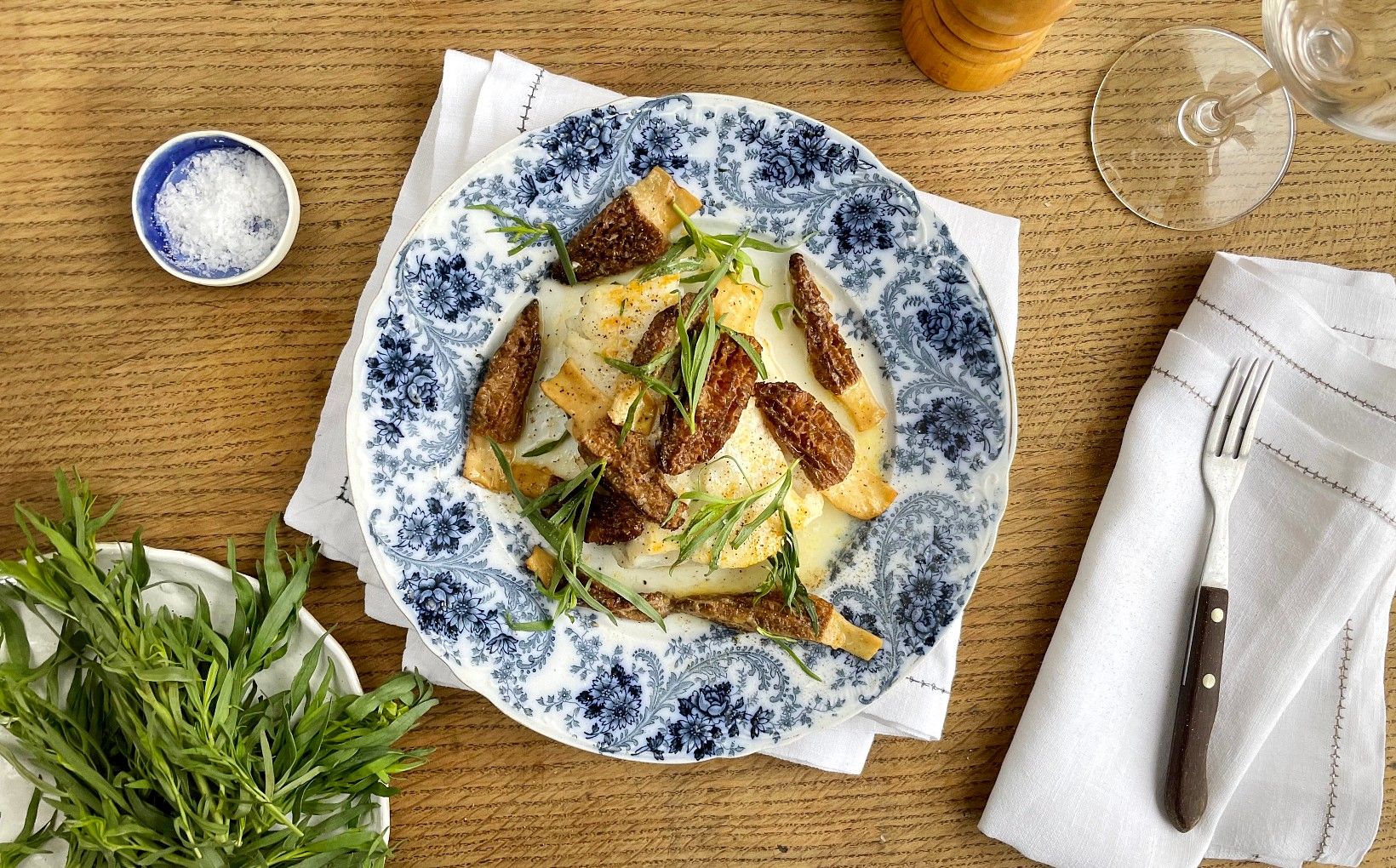 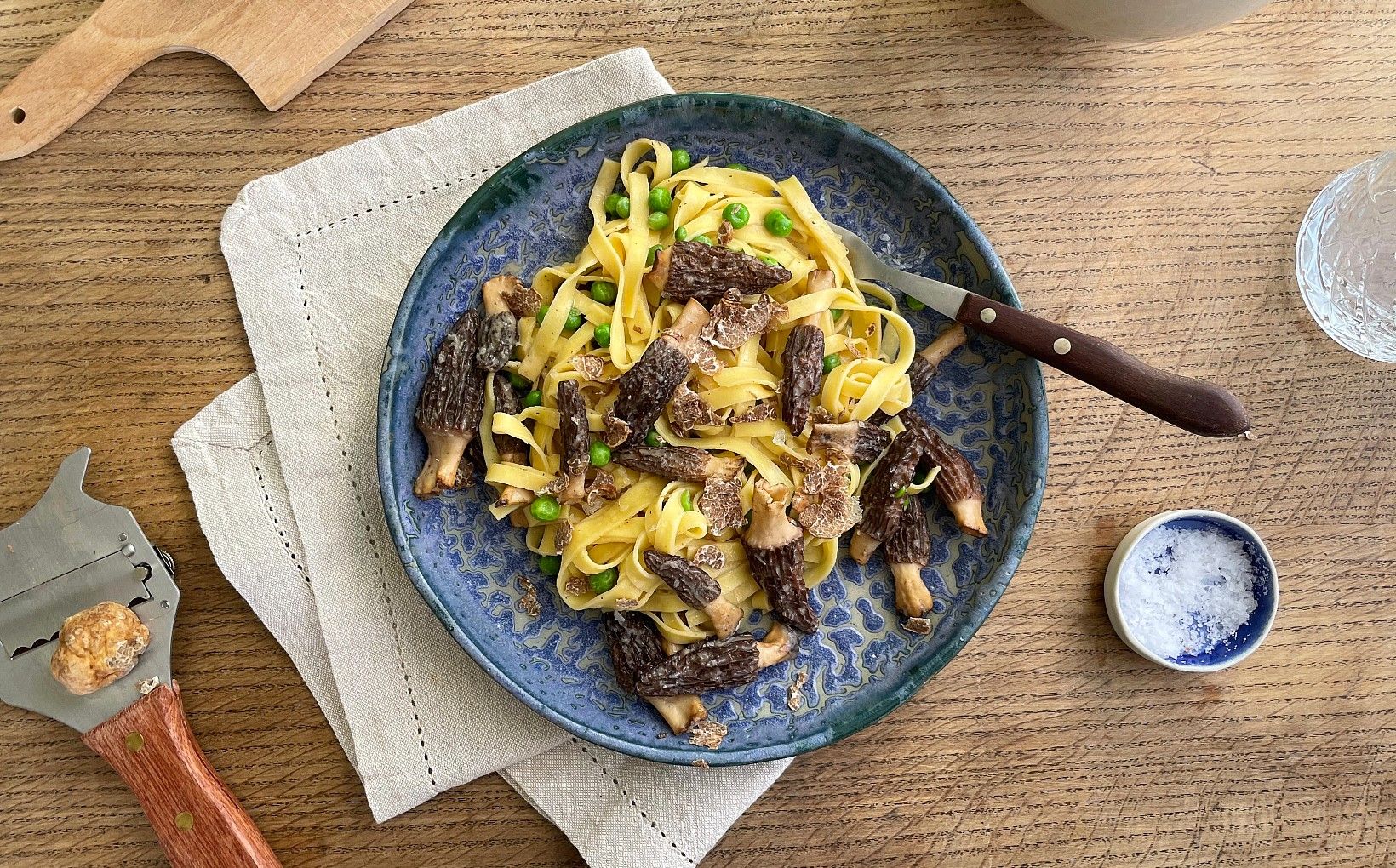 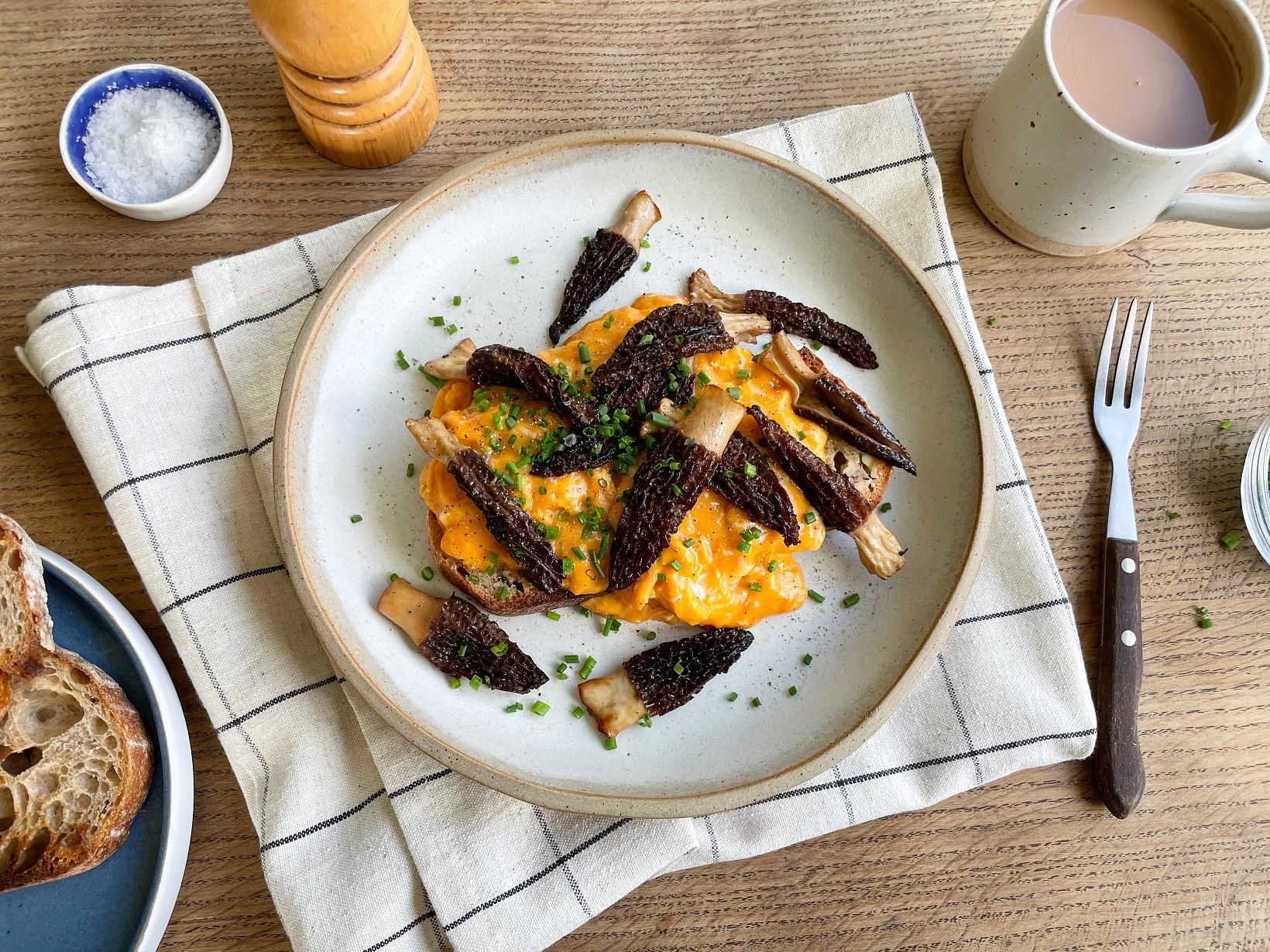 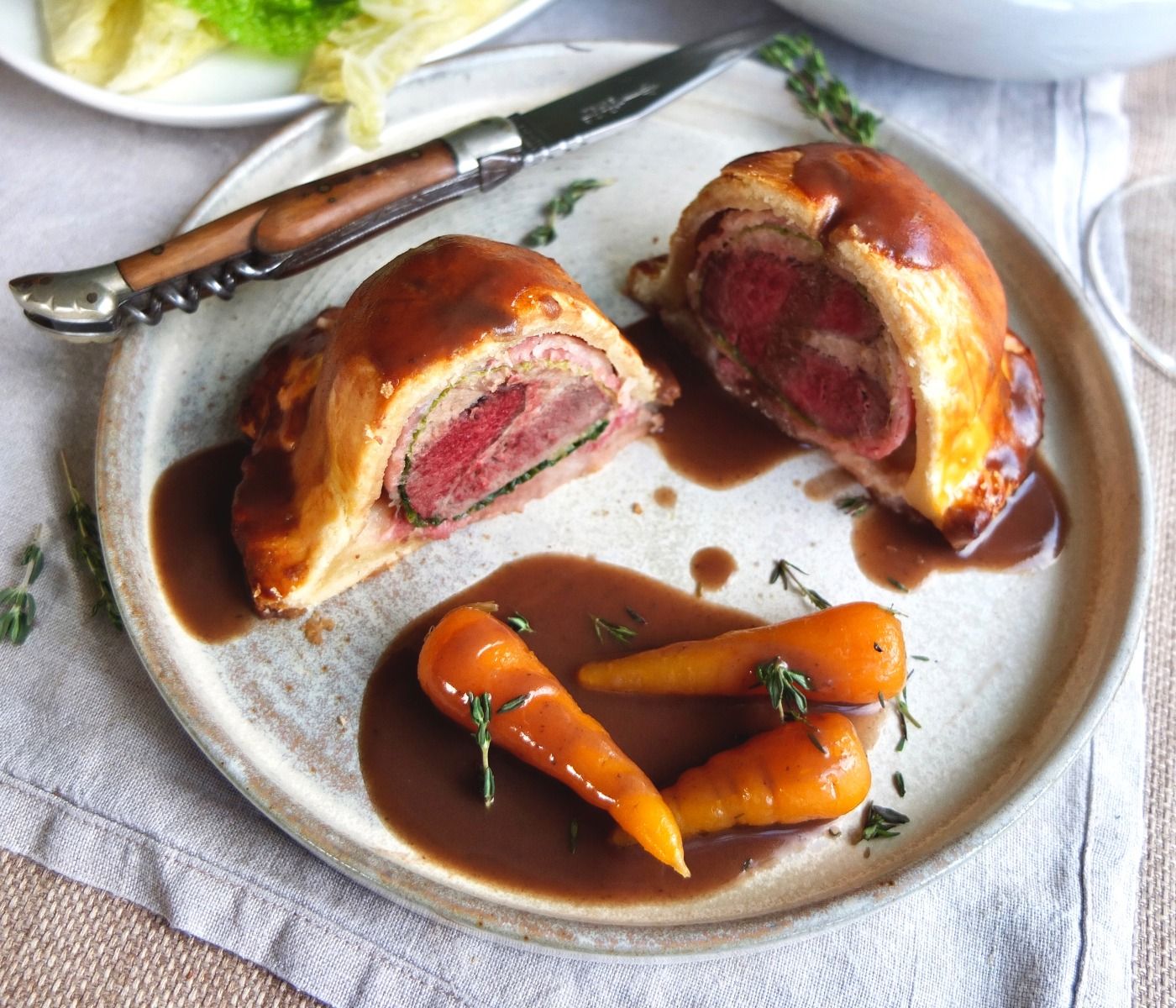 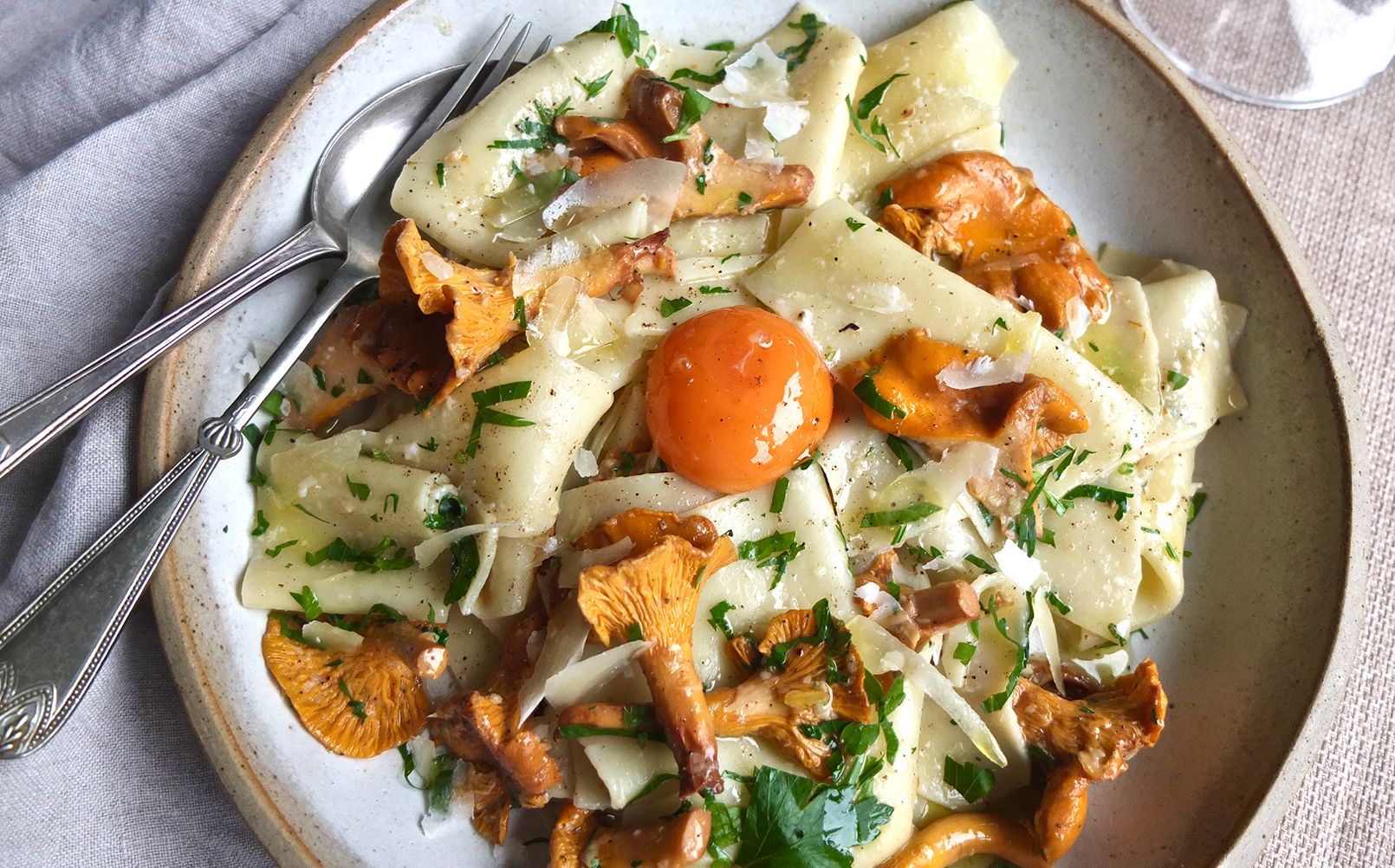 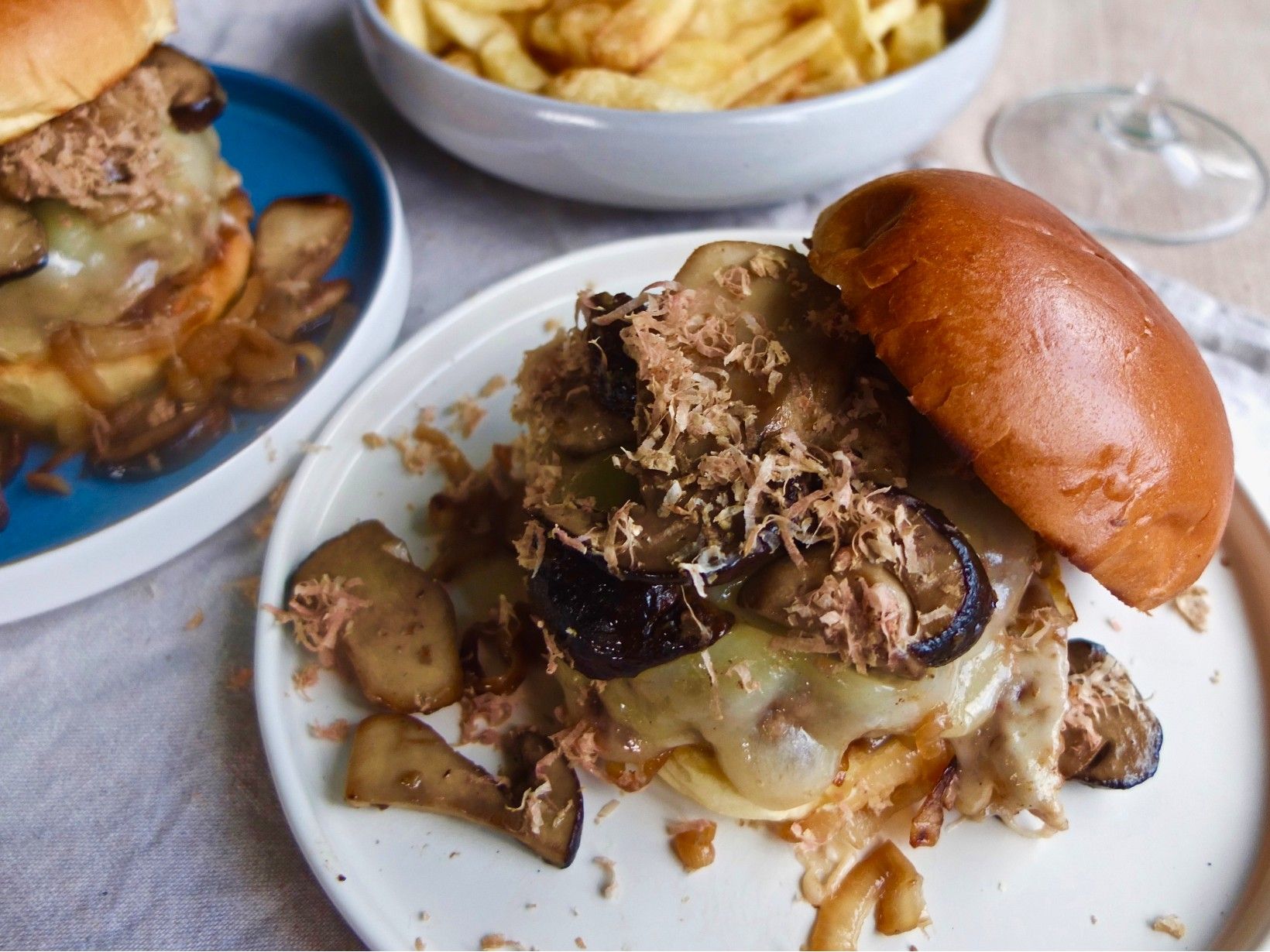 Browse our fantastic selection of mushrooms and take a look at Drogo’s Kitchen for even more recipes and cooking advice. If you try out any of our ingredients or recipes please do tag us on social media! We love to see what you create.