The store will not work correctly in the case when cookies are disabled.
International Shipping is not currently available.  Jubilee Delivery Dates - DPD will not be delivering on Thu 2nd or Fri 3rd June, which are now Bank Holidays.  Apologies for any inconvenience. 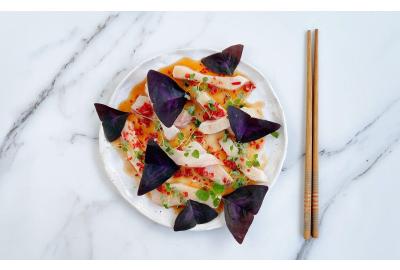 What is sashimi grade fish?

Sashimi grade fish is fish that has been judged as very high quality. Since the fish will be eaten raw, any flaws or imperfections will be picked up; the flavour and texture must be flawless.

The word sashimi means ‘pierced body’ and it’s thought that this may come from the traditional method of harvesting, which involves piercing the brain of the fish with a sharp spike and storing it on ice. This means a minimal amount of lactic acid gets into the flesh of the fish, therefore preserving its integrity as much as possible.

Is sashimi different to sushi?

How do you prepare sashimi?

Sashimi should be stored in the fridge until you are ready to use it, and if you are slicing your sashimi ahead of time, make sure to keep the slices refrigerated until just before serving. Raw fish should never be stored or left to sit at room temperature.

When slicing sashimi, the flesh should be cut against the grain, which will be perpendicular to the direction of the fish’s spine. Cutting the sashimi in this direction is essential, otherwise it will have an unpleasant, stringy texture. The sashimi should also be sliced thinly, so that it is delicate and easy to eat. Traditionally, the chef cuts the sashimi into different thicknesses according to the type of fish and its age, and the season.

What are the different cuts of sashimi?

Hira-zuruki or ‘flat slice’ cut: This is a common cut of sashimi, around 10mm thick and a ‘domino shape’. Tuna and salmon are most commonly cut in this shape.

Usu-zukuri or ‘thin slice’ cut: A very thin slice of fish, this style is commonly used for firm fish, such as bream.

Kaku-zukuri or ‘square slice’ cut: A cube cut of fish, around 20mm square.

How should sashimi be served?

Sashimi is often served at the beginning of a meal as the flavour is delicate and serving it later can mean it’s overwhelmed by stronger flavours. Sometimes however, sashimi may be served later as a more substantial course, alongside rice and miso soup.

Sashimi is usually presented on top of a garnish, such as thinly sliced radish (daikon) or shiso leaves.

What are the essential accompaniments for sashimi?

Sashimi is often served with a dipping sauce, usually based around soy sauce. At Fine Food Specialist we have a range of soy sauces that are perfect for this, including some very special aged soy sauces, which really do the sashimi justice. How about treating yourself to a bottle of our kamebishi soy sauce? We have bottles aged to 2, 3 and 5 years to choose from - the depth and complexity of these soy sauces far outweighs that of regular soy sauce.

Other ingredients can be added to the dipping sauce too, such as very finely grated ginger, or garlic. Chilli is generally not used with sashimi, however wasabi is very commonly used to bring some heat to the dish. Wasabi is a spicy green rhizome, which is finely grated using a special grater.